Admire Lady Liberty on an NYC Boat Tour
You are using an outdated browser. Please upgrade your browser to improve your experience and security.
Scroll to Select Your Pass Select The Pass That Fits Your Needs
Buy with confidence: take up to 24 months to use the tickets after purchase
1 / 6
Single Ride Pass 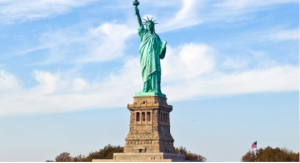 The Statute of Liberty is one of the immediately recognizable icons in New York. Because it sits on an island, it is best viewed from the water. As such, NYC boat tours are the perfect way to get a glimpse of our Lady Liberty. While you can see it in the distance from the shoreline, the view simply won’t compare to the one from a boat slowly sailing past. Because you are sailing along the Statue of Liberty, you will also get multiple viewing angles and be sure to get the perfect photograph. While it is possible to actually climb up into the Statue of Liberty and enter the museum, you now need reservations, and these fill up quickly. Because of this and the fact that the view of the statue is simply better from the water, most visitors choose to view Lady Liberty during NYC boat tours instead. Of course, you would also have to take a ferry to reach the Statue of Liberty and the island it sits upon. For most people, if you are going to pay for a boat ride, you might as well see multiple sites instead of just being ferried to a single destination and back, which is the beauty of NYC boat tours.

The History You Are Admiring

As you gaze upon the Statue of Liberty during your NYC boat tour, take a moment to think about just how significant this statue is. The idea of creating a monument for the USA as a gift from the French was introduced by Edouard de Laboulaye in 1865. It wasn’t until 10 years later that Frederic Auguste Bartholdi received his commission to design the statue with the goal of completion in 1876, commemorating America’s 100 years of independence. This statue was a combined effort between France and the United States, showing their unity. America would take care of the pedestal while the French made the statue and assembled it. Alexandre Gustave Eiffel, famed designer of the Eiffel Tower, designed the skeletal framework for the statue, and both countries fundraised to cover the costs of construction.

Other Sites to Admire

During NYC boat tours, you get the chance to admire much more than just the Statue of Liberty. The tours also take you by other Manhattan landmarks, including the World Trade Center, the Brooklyn Bridge, Battery Park, Wall Street, the Manhattan Bridge, and the South Street Seaport. For your chance to admire Lady Liberty from every angle on an NYC boat tour, simply contact us. The Liberty Cruise is a hop-on, hop-off cruise, so you can take photos of key sites along the way, as well.