History and Traditions of Rockefeller Center
You are using an outdated browser. Please upgrade your browser to improve your experience and security.
Scroll to Select Your Pass Select The Pass That Fits Your Needs
Buy with confidence: take up to 12 months to use the tickets after purchase
1 / 7
Hop-On Hop-Off Downtown Tour Same Day

Top Of The Rock

History and Traditions of Rockefeller Center

Ice-skating, shopping, the filming of America’s most famous shows — all this and more is happening at Rockefeller Center. NYC is home to magnificent skyscrapers, art deco buildings, and awe-inspiring vistas, and this plaza has all three in one place. A grouping of 19 different historic buildings, Rockefeller Center in New York City is jam-packed with some of the most beautiful attractions in the Big Apple.

Why was it designed this way, and what is the unique history that brought this NYC landmark housing everything from Radio City Music Hall to NBC Studios to the iconic Rockefeller Center Top of the Rock observation deck to life?

This “city within a city” has changed the way America sees itself, not just how tourists visit Manhattan. But with extreme ingenuity, extreme poverty, and extreme wealth all having an important stake in Rockefeller Center history, facts can sometimes feel like fiction, starting with the fact that the plans for this project were finalized just a day before the stock market crash of 1929. 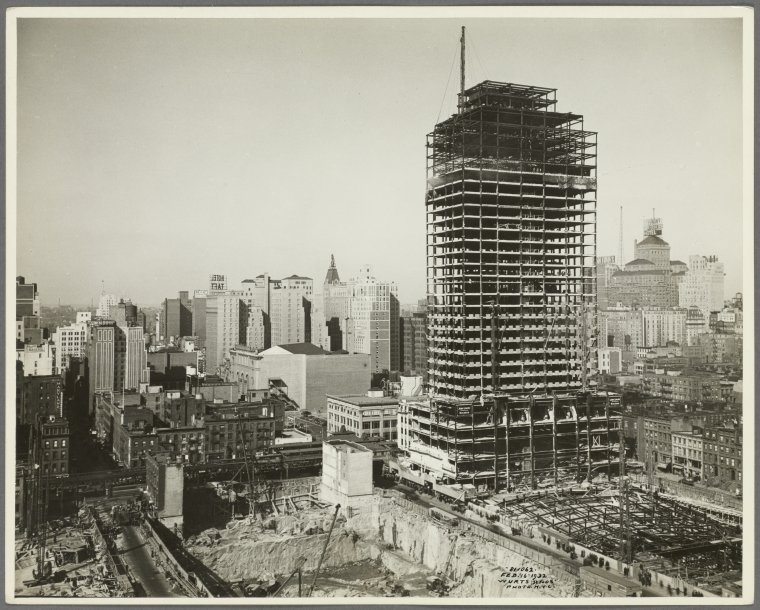 Caption: The full complex at 6th Avenue and West 50th Street is being worked on in 1932. 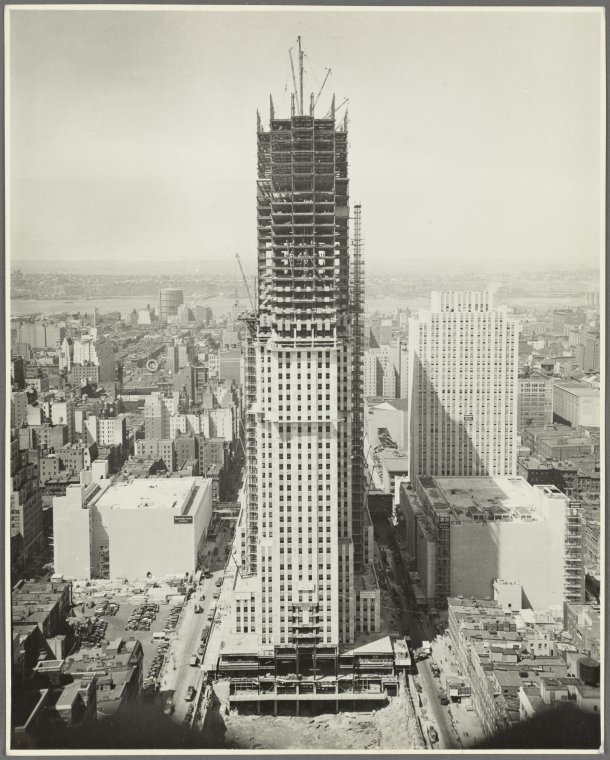 Caption: The historic building at 30 Rockefeller Plaza is under construction in 1932. 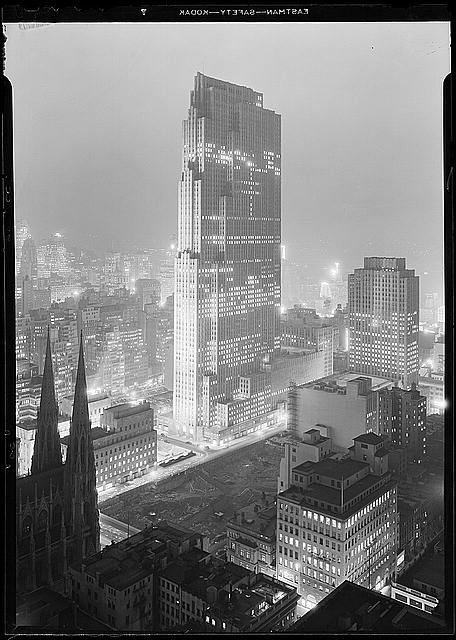 Caption: The finished RCA Building gleams at night in 1933. 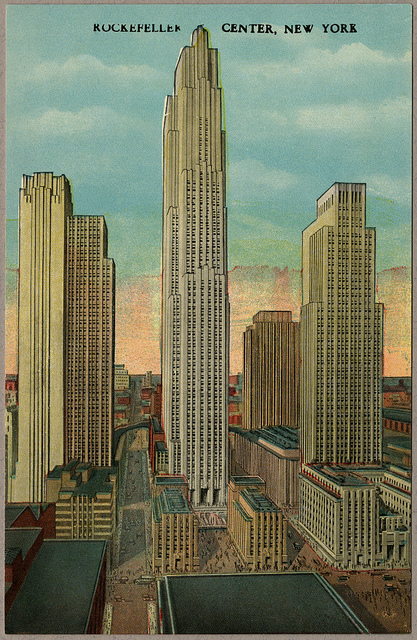 Caption: A postcard from the late 1930s depicts the finished building.

Caption: The controversial Man at the Crossroads painting showing the pressures of one man choosing between capitalism and communism was destroyed by Nelson Rockefeller, son of John D. Rockefeller Jr. This is a re-created version of the painting: Man, Controller of the Universe. 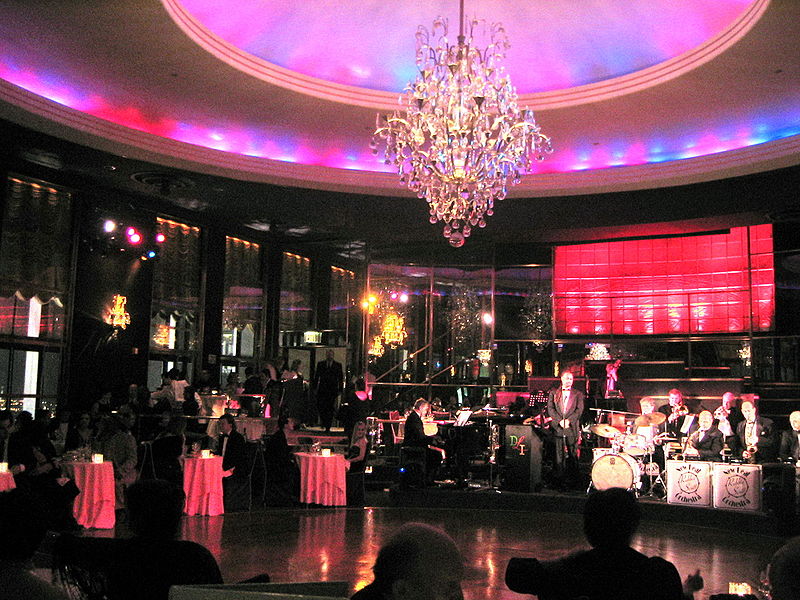 Caption: A modern band plays in the Rainbow Room. 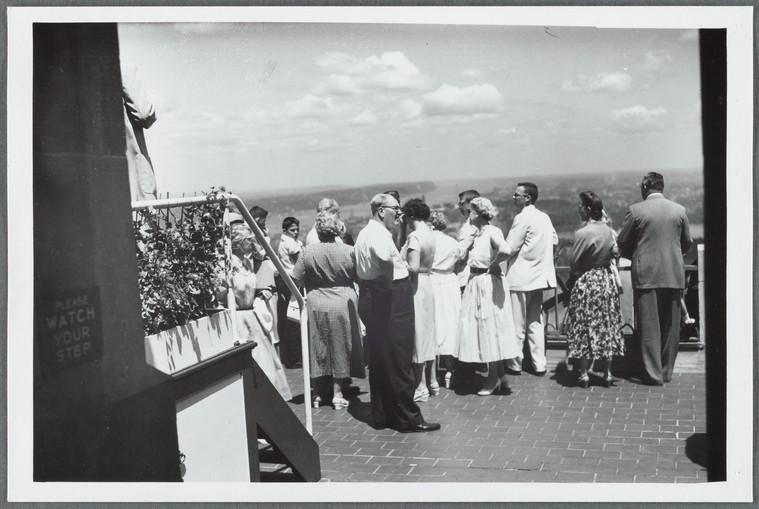 Caption: Tourists admire the view from Rockefeller Center in 1956.

Amid the Great Depression, in 1931, demolition workers in the area where Rockefeller Center would be built pooled their money to buy a 20-foot-high Christmas tree, which they adorned with homemade garlands and even tin cans. It stood as a symbol of American persistence even during tough economic times. In 1933, a publicist was inspired by that first tree and decided to make this an official yearly tradition. 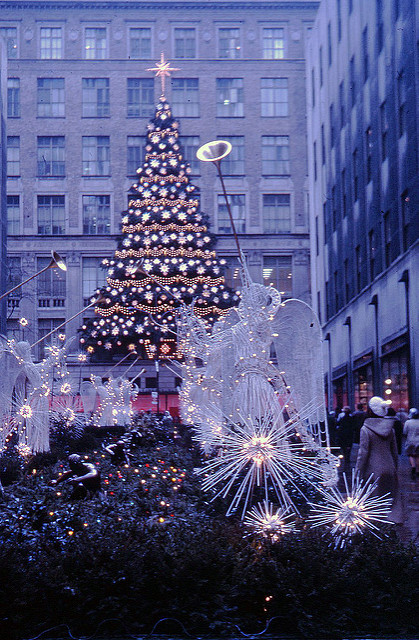 While the trees were huge, they weren’t always dazzling: They remained unlit and undecorated during World War II in order to avoid using materials needed for the war effort. But most years, the tree has been lit, and since 1951, the Rockefeller Center tree-lighting ceremony has been televised by NBC. Today, the tree, typically a Norway Spruce that’s more than 70 feet tall, sports a star made out of LEDs and 3 million Swarovski crystals. The tree is flanked by angel sculptures created by artist Valerie Clarebout in 1969. 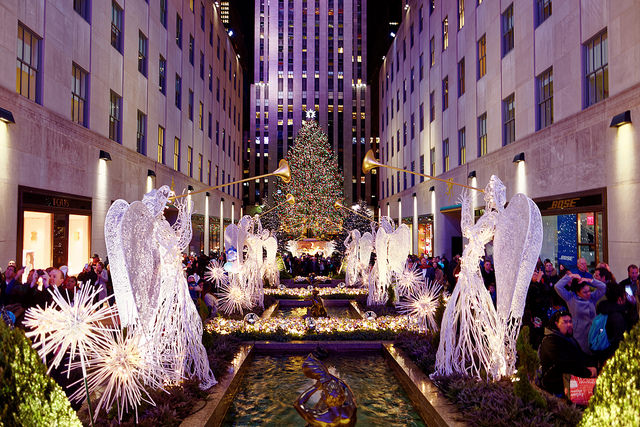 There’s typically a great deal of excitement about the shipping of the giant tree through New York to its home at Rockefeller Center, and the extravagant Rockefeller tree-lighting ceremony now features performances by American celebrities. Millions of people either tune in or flock in to NYC to see the lightning of the Christmas tree at Rockefeller Center: History has shown that the number of tourists who visit to see the tree is usually about 125 million each year. 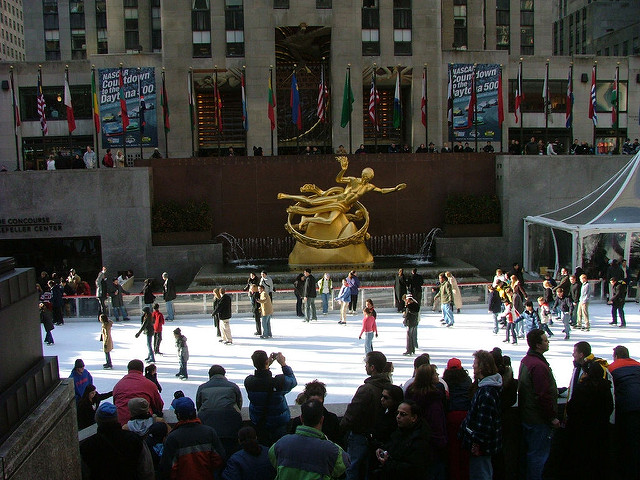 Another major attraction for visitors is The Rink at Rockefeller Center, NYC’s most famous and beloved ice-skating rink. A golden Prometheus overlooks the more than 150,000 people who skate along the rink’s surface every year. It is possibly the most filmed part of all of Rockefeller Center, staring in movies like Elf and shows like Saturday Night Live. While the rink is typically only open in New York’s winter months, the statues, shopping, and shows at Radio City Music Hall draw visitors all year long.